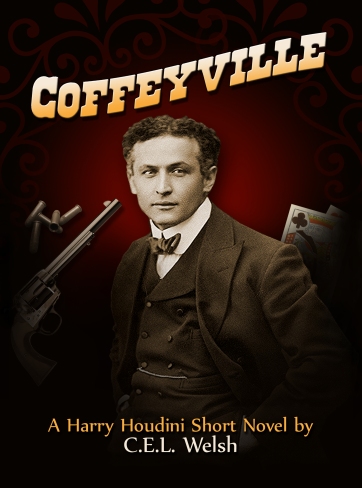 “Great period piece dealing with the early days of Harry Houdini. I love how the real events of his life weave through the story, which has a strong narrative drive…it reads almost as a one hour drama on the history channel.”

-Craig Terlson, author of Correction Line and Fall In One Day

Coffeyville, Kansas, is known as the “Town that stopped the Dalton Gang.” Many shots were fired in the early days of Coffeyville…but there was one lone bullet, fired some years after the Daltons were laid low, that passed unnoticed by most. One man, however, would never forget; a young Harry Houdini, still some years before fame would find him. The events of Coffeyville would ricochet down through the years, giving Houdini the ammunition he would need to pull off the greatest illusion of his epic career. Can you keep up with Houdini’s misdirection?

Follow Houdini’s assistant, Franz Kukol, as he discovers the secret behind Coffeville.

Pick up the e-book at:

Who is this guy?

C.E.L. Welsh was born the son of a soldier...
Welsh on Amazon
Welsh on Twitter
Welsh on Facebook
Tribe Roll
Cover Gallery

What if The Strange Case of Dr. Jekyll and Mr. Hyde wasn't fiction?